Critical remarks on Museuminsel and problems of nationalism

Museuminsel locates in Berlin-Mitte, which is a theme-oriented museum cluster. The museums are strongly tied with a promenade that visitors can pass one Museum to another without any hurdle. However, each building’s architectural characteristics are carefully considered when they curate the content. There is one linear chronologic path in the display. In Museumsinsel, the theme is marketing German national history with a unified architectural language. Museumsinsel is part of UNESCO world heritage since 1999, so the architectural interpretations are minimized, and the main concern is history, although there are very famous architects involved in the projects.

Museuminsel has evolved over the course of time. In the center of the city, there are five museums on this island: the Altes Museum, one of the first museums in Europe (1830) with a collection of Greek and Roman sculptures and arts, the Neues Museum (1859), the Alte Nationalgalerie (1876), the Bodemuseum (1904) and the Pergamon Museum (1930).

Introduction to the area

The first construction of the  Museum Island began in 1830 with the Schinkel-designed Altes Museum. In 1930, when the Pergamon Museum opened, the cluster was completed. A significant proportion of the buildings were destroyed during the Second World War. Germany’s post-war division (1949) contributed to a division between East and West Berlin of many of the collections. Before the cultural property of East and West Berlin reunified (1990), The Museum Island was part of East Berlin. 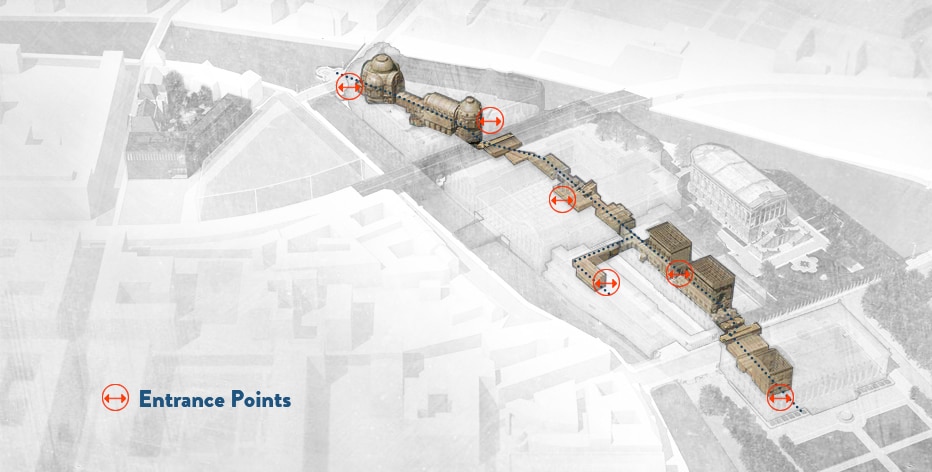 The second construction in Museuminsel was the Neues Museum planned by Friedrich August Stüler on Berlin’s Museum Island and constructed between 1841 and 1859. The building was left in ruins by heavy bombs during the  Second World War, with entire parts missing and others badly destroyed. Following the war, several restoration attempts were made; however, the structure was left exposed to nature. Until David Chipperfield’s restoration project.

The museums on Museum Island are part of the Prussian State Cultural Heritage*[1] (SPK) foundation. As landmarks, the individual museums on MuseumIsland are valued as part of the architectural history of the region. Since Berlin’s museum cluster is surrounded by the waters of the River Spree, the name Museumisland has become more suitable.

The Museum Island redevelopment project (Masterplan Museuminsel Berlin, 2000)is essentially based on improving the mutual partnerships between different museums while making them more available to public access. In the proposed construction of a single entrance and an archaeological promenade, the idea was to display the highlights of each museum.

The purpose of an underground tunnel is to provide a quick tour for tourists that do not have much time so they can see many important pieces from each museum’s collection. It can be seen for approximately thirty minutes, which is very convenient for a quick tour. Museums’ collections belong to museum island highly complement each other in terms of their archeologic character. The collections are tied up through reflecting over 6.000 years of European cultural heritage.  Permanent collections draw many tourist attractions; however, temporary exhibitions are targeting mostly local visitors.

During the Second World War, most of the buildings located on the Island had been damaged and never fully restored. For example, The Bode Museum was renovated between 1997-2006; also, the Alte Nationalgalerie museum was renovated adequately in 1998-2001. Regarding public relations and marketing, there are strong cooperation relationships among all the museums, ticketing and press relationships include. All state museums are centrally organized and administered, while all museums have an independent curator. The fact that the brochures of all the museums forming the Staatliche Museen Preussischer Kulturbesitz (SMPK) were prepared in compliance with the requirements of the  (SMPK). Furthermore, they share the same educational service; they create joint publications, and they have a shared website for the museums. 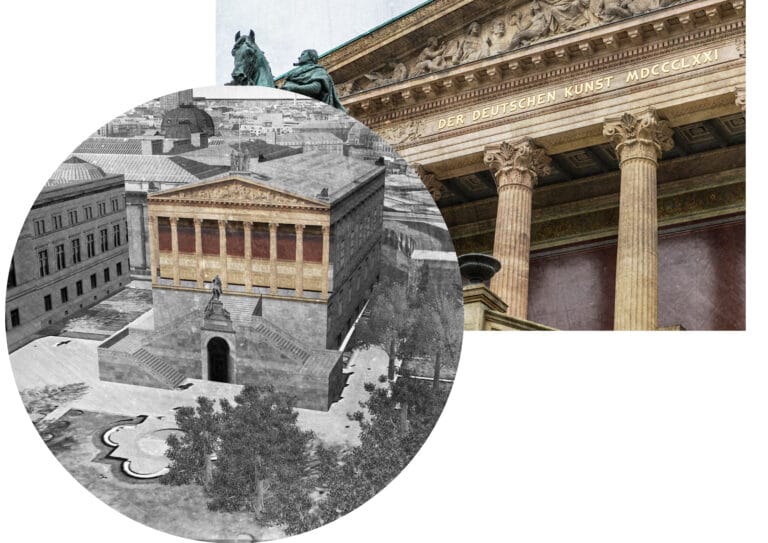 The Museum as a symbol for national identity in Germany

Prussian Art Politics had a lot to do with shaping museum power in Germany. The 19th-century museum boom reflects upon the museum architecture by reviving the classical temple architecture elements in the museum exterior. The classical style of architecture represented the noble aspects of civilizations; hence it becomes the vocabulary of museum architecture within the ideological frame. We can look at early examples of public museums in the same architectural references such as Munich’s Glyptothek, Berlin’s Altes Museum, the Metropolitan Museum of Art in New York, British Museum, etc.  Museums were designed to create power, maintain the status quo, and control social mechanisms.

The Museum boom had reflected differently in a different part of Europe. Unlike in Britain in Germany, it was hard to constitute a policy all around the country. At the time, Germany was not a united country like today; it has consisted of many city republics and states ruled by local princes and dukes. Prussia was the most potent military power among those states, which was lost hence Vienna Congress 1815. Baviera became the largest state. Therefore, the art collections there were significant and valuable. That was the reason some of the early museums started to be established in Munich. The political conflict escalated between Baviera and Prussia, which was also defining German national identity in a way.  Other than war, museums were the tool for creating that national identity. Before diving into that phenomenon, the first museum boom in Europe and Britain needs to be explained.

The birth of a nation-state in the early 19th century has a lot to do with the modern museum paradigm. Particularly in Germany, the idea of creating the German national entity was based on creating cultural unity. Germany was relatively late adapting capitalism while England and France already industrialized in the middle of the 19th century.

After the Napoleonic war in Prussia, the idea of creating systematic national education emerged. This coalesced with the idea of “Germany is a culture-nation.” *Kulturnation, which was the basis for the establishment of a modern nation-state.  This centralization of power had resulted in two different tendencies on the local rulers; either they were scared for unity and resistance or gifted their collections not to end up like France as a result of civil uprising. Although Germany was late for industrialization, visual art was seen as uniting strength for the German Republic. The competition between Prussia and Bavaria reflects upon the comparison between Munich and Berlin; both cities have strong museum policies to prove of having a real German cultural basis. This situation led them to have many museums starting from the late 19th century. Unlike in England, museums were considered public entities in Germany; they did not belong to only royals. It helped to grow the idea of nationalism because people were building their own museums with the massive contributions of wealthies. These museums took over the educational role immediately after they became accessible to the public.

That new role was also prominent in the museum architecture, and it became to convey the message of impressiveness and to belong to a higher status quo

All the more so, as Germany’s political, social, and economic instability endured during the twentieth century, questions of nationalism and national identity resurfaced with stronger intensity than before. Art galleries and museums played an important part in the disinformation campaign during the National Socialist regime, both as educational institutions and, more importantly, in fostering the powerful national identity that was entrenched in Hitler’s politics. As a result, just as in the United Kingdom, the main reasons for museum policy have shifted significantly in the last two centuries. The method, on the other hand, has been consistent throughout.

The theories and attitudes developed during this century shaped government leaders and museum practitioners in the twentieth and twenty-first centuries, influencing their cultural reform agenda. Since offering a backdrop to these attitudes, the three styles of museum architecture built during the nineteenth century — focused on the temple, palace, and church architecture — have continued to be used as the model for many museums. These systems not only represented the heritage of the collections, but they also gave fitting symbolism and a sense of grandeur to the institutions, which was appropriate for their current public roles in the nineteenth century.