Gender pronoun questions lead me to an epiphany about national pronouns. Certain ideologic/ patriotic assumptions tell us to accept what the national identity of our passports dictates. I am dreaming in near future the question of “what is your national pronoun?” will be the norm. I do not have a solid answer yet, most probably it will be something like “ohh, I do not believe in nation-states but I would say I am an ethnic cocktail. I am from Turkey.” Am I demanding too much policy discourse from the art world? Do I care because I am simply a migrant in Europe?         >> read more

The western definition of culture based on the time-traveling approach, includes the tree-age system, ranked people who had less equipped as primitive in the hierarchic frame of ethnography. Urbanization and the industrial revolution are still considered the biggest human development in history therefore some civilizations owning them the very first creates the idea of privileged society. This brings the question of what makes a society primitive under what categorization. Hence, the question emerges how this western perspective applies to the exhibiting strategies? Assimilating or exoticizing?        >> read more

Critical remarks on Museuminsel and problems of nationalism

Cape Town Six District: Deconstruction of an apartheid suburban area to the memorial cultural district.District Six has become an iconic landmark in Cape Town and a reminder of the dispossession and injustice committed to its residents as a result of the Group Areas Act implemented during the apartheid era.  >> read more

The museum agreement with Abu Dhabi was praised by French President Jacques Chirac, who said it represents a particular vision of the future in which each party to the agreement is proud of its heritage and identity but still acknowledging the fair equality of all cultures. >> read more

Critical remarks on Art Institutions in the UAE

The article is intended to unfold the dialogue between national initiatives and architects and how it affects planning decisions, architectural vocabulary, and overall urban relationships.. >> read more

Let’s talk about safe and hype political topics in the art world which are almost necessary to be involved. >> read more

Attention! this is a very serious statement. I do not want to stand by capital and power. I want a decent life.>> read more

The museum phenomena have been centered on debates in many layers, their architecture, their typology and their role in society. The museum’s historical role iis a giant field in today’s academic world; nevertheless, there is a consensus about a certain aspects of museums’ function.>> read more

Spirituality left its place to rationality with the enlightenment and these days rationality evolves political rationality. Hence the social justice demand from museums is increasing day by day.>> read more

I am studying the variations of the motif(s) are presented in the Anatolian rugs for almost a year. I am trying to formulate the abstraction language in their use of geometry. Stylized natural figures are good starting points to have a certain understanding of Anatolian folkloric elements particularly in rug weaving tradition.

For instance in Anatolia the bird motif carrying so many different meanings such as owls and ravens imply bad luck while doves, pigeons and nightingales are used to symbolize good luck. In fortune-telling mythology (if such a thing exists) the bird means longing and expectation of news. I will continue to resolve the symbols as alphabetic elements of Anatolian languages for my project ‘other alphabets’. 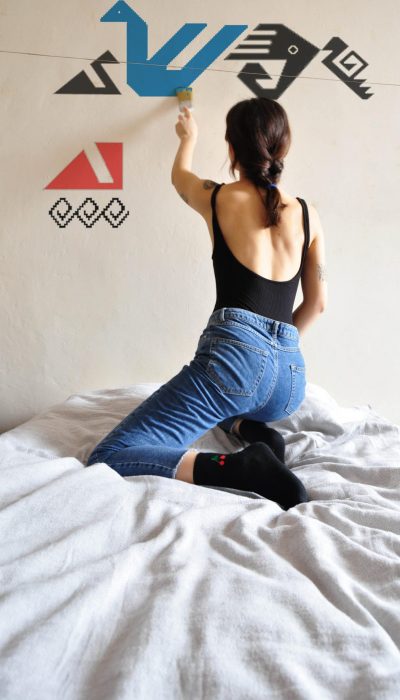 I admire rhythm, repetition, and proportion in printed media. My works are about the exaggeration of the existing compositional elements while whipping off the meaning if possible.  I explore the possibilities of the text syntax.
If we take out the sound and the meaning from a text, there will be the essence left, which I am interested in. My art in the state of flux.

Not to be understood was my biggest fear. It is really hard to people get me especially distinguishing when I am sincere and when I am pretending. Mostly I am doing what I cannot avoid doing. I am being strategic very less of the time. But my strategies are strong, and I am sticking to them even stronger.

A crazy act is often a response to something. It is just an act named ‘crazy’ by others later on. When it comes to labeling like ‘crazy’ or ‘bitchy’ gender matters. The same behavior of a man maybe would not be called crazy, it would be called aggressive instead. Even though I am still confused about gender-related dichotomy, in terms of cultural codes something defines as opposite features between man and woman.

When it comes to suppressing a crazy act, the patriarchy uses medication effectively. Since the 19th century to today, women have to deal with over drugging more than men. The justification of over drugging and sympathizing with them through advertisements are still hot topics of the ethical discourse. I choose to create the pink pills to underline the importance of the woman-centered approach to medical science instead of profit-centered medical marketing.

9 pills here stand for nine shades of feminist theories, although there are more I choose to stay in the comfort of my understanding, and the role of the feminist approach in medical science.

Maria Lai, a great Sardinian artist, says art is a game for adults. Her art consists of humor, provocation, calmness, and tradition. She encourages me to continue what I do enjoy. Stitching, sewing, quilting, embroidery etc., has always been considered feminine activities, which is not the real problem. I am not sure even if there is a problem in the art world, but I personally have one with feminine, artistic techniques are being overlooked. Those techniques are considered as crafts but not art even today. Any technique may embed many thoughts or not. Art might be made of until a long thought process or not.

What about critical dadaism?

The Order of Things

Caravaggio’s straightforwardness of correspondence to his dark side encouraged me to build up my self-portrait story. The story must begin only now in the time of isolation. It is maybe the time for a bit of everyone to re-evaluate their life and their self-image. All together we are experiencing being ‘self’, being distance being away, being alone. Contemporariness of Caravaggio was his purity of storytelling. Self-portrait of an artist is where the very story begins for looking at self. To me, isolation only could bring the need of looking at myself and finding the courage to share with the connected world outside without afraid of finding the shadow of me.